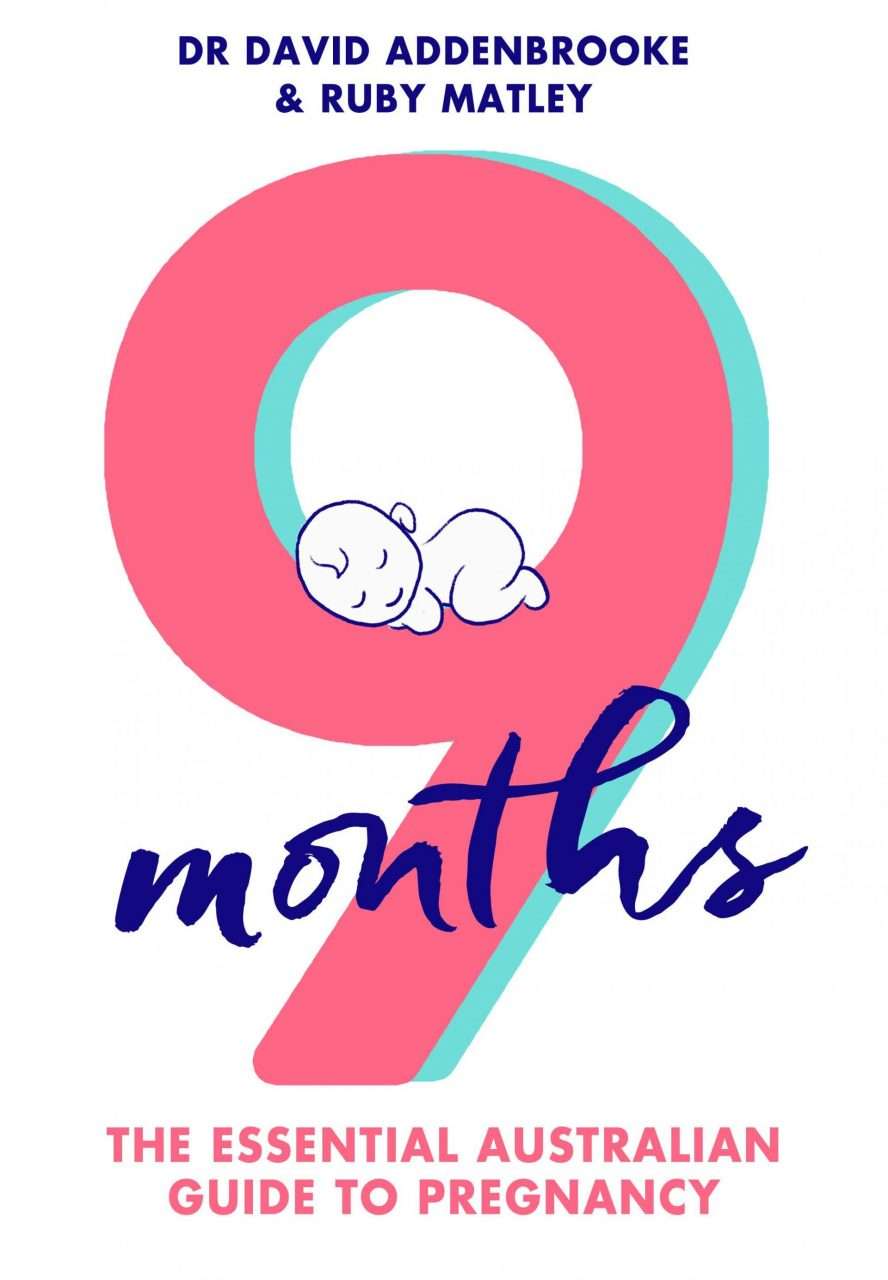 9 Months: The Essential Australian Guide to Pregnancy is the latest pregnancy book to be released in Australia. Written by Dr David Addenbrooke and Ruby Matley, this amazing resource covers everything you need to know from pregnancy right through to birth.

As you all know David is an obstetrician, so he is able to give you first-hand knowledge on what you are likely to encounter during your first trimester of pregnancy through to the different stages of labour, birthing options available and modes of delivery. It also incorporates a mother’s perspective on her experience of pregnancy and birth, and even answers those questions that most women are too embarrassed to ask.

David wrote his portion of the book over the space of a year in between working during the day, call outs at the night, and on the rare weekend he had off. As a writer I was in awe of how seamlessly he managed to smash out 70,000 words with what appeared to be such ease. I didn’t witness any bouts of writer’s block, self-doubt or second guessing. This man knows his work, is confident in his knowledge and was enthusiastic about sharing it with women around Australia (and hopefully the world).

Few people know that David has a dry and relatable sense of humour, and although this doesn’t translate in the book you will get to see this refreshing humour occasionally on this blog. Proving that he isn’t just a doctor, but a real human being with life experiences of his own, David’s sense of calm and genuineness is what makes 9 months a great reference book for any person, whether you are a pregnant woman, partner or support person.

I know I may sound bias because I am David’s wife, but seriously, I witnessed all the blood, sweat and tears he put in to creating this invaluable resource. It is worth a read, trust me.

So, I’ll turn it over to David to answer a few questions about the book…

What made you want to write a book like this?

To be honest, I haven’t really read any books about pregnancy that aren’t textbooks aimed at doctors (of which I have read A LOT…). When I skimmed through the books that were written for women, I was stuck by a few things.

1 – They were often not relevant to Australia (usually American).

2 – They were not written by obstetricians. Whilst some were written by people with a healthcare or midwifery background, few were actually written by an actual practicing obstetrician or midwife. At best, a few of the books out there have a foreword, or were skimmed over by an obstetrician. Some were made into “Australian editions” by having a professor read it and give a rubber stamp. Few obstetricians actually wrote the advice being offered.

3 – They focus more on normal than complicated pregnancies. When it came to the interventional stuff (you know, like forceps, episiotomies, bleeding), often the books would gloss past this section and get back to the next “nice” topic. In a lot of these books, there are frequent cuts to, “If this happens – talk to your doctor…”. Normal is important, but it is when shit happens that you need some actual advice.

So in this book, I included what the doctor will actually say if things don’t go to plan…

When the opportunity came to write this book, I wanted it to be relevant to Australian women, not gloss over the scary stuff and to put down in paper what I say to women every day in my practice as an obstetrician.

Without gloating, it was actually way easier than I thought it would be.

Besides finding the time, in between delivering babies, performing surgical lists and occasionally pretending to be a deadbeat dad (am I right Cherie?), when I actually sat in front of the computer, it pretty much wrote itself.

I previously wrote a lot of fiction (short stories and even a novella in university), and would spend hours agonising over a few hundred words. When it is stuff I am doing every day, I found that it just flew out of me at a few thousand words an hour… When people ask how long it took to write, I joke “9 months”, but that is actually pretty accurate. I sent a draft of 70,000 words to the publishers mid last year, and that was pretty much 9 months of text blurted out sitting on labour wards waiting for patients to get fully dilated, or between operating cases in the theatre. Bits and pieces whenever the chance arose.

Whilst originally it was going to be a more blended collaboration with Ruby, after she moved away from the Northern Rivers, we kind of wrote our own sections in isolation before the publishers put the thing together. I think this worked out okay though, because it is very clear in the book what is medical advice from me, and what is more emotional and lifestyle orientated advice from Ruby.

What do you hope this book will achieve?

It might pay for a couple of months of my indemnity insurance… But it was never a financial venture. I originally thought it might help me grow a bigger obstetric practice, but I am almost at the point of having to turn patients away as it is…

So I guess there aren’t really any selfish reasons to hope the book goes well. I honestly just hope that it is well received and offers pregnant women some sound advice and comfort (particularly when complications arise).

It might also mean that I can save some time in my consults if patients tell me they already had some of their questions answered. Maybe I won’t run an hour late all the time if that happens…

What makes this book different to other pregnancy books?

As I mentioned above, being written by an actual specialist obstetrician is a pretty important start… The structure of having the two voices is also unique, so that it combines sound specialist advice with the advice of a mother who has been through it before…

Come to think of it, that’s kind of what this website is about too…

I think that aspect of getting reputable advice, whilst being able to share common birth experiences and fears is really important for a lot of women, especially experiencing pregnancy and birth for the first time.

Did you have a desire to write before being approached to co-create this book?

Sure. I just didn’t really think it would be a pregnancy book though. I was going to be the Australian J D Salinger for the Millennials…

I wrote that thing in Uni, which was kind of a paranoid Lewis Carroll mid-life crisis for a twenty-something guy with Asperger’s.

Tell us something about yourself that few people know?

Well, few people who don’t actually know me would know that I am a video game addict.

I have a portable gaming device that I bring with me to long births in the middle of the night, so that if things drag on I can get a hit behind the labour ward desk…

I would really like to write something with my wife.

Maybe a blog for mothers or something…

Seriously though, I have a few ideas for a “next” book, which continues the collaborative trend with multiple perspectives on birth.

Eventually, if I ever manage to wind down a bit with obstetric practice, I may even go back to writing fiction. Though I’m not sure if I would use a pen-name for that one. Particularly if things I decided to write about weren’t quite fitting to be said by a practicing obstetrician…

Maybe I will finish this thing I started during my registrar training years. It was about an obstetric trainee and the true thoughts that go through your head. I used a make-believe friend who was the alter ego in that one. It wasn’t what you might think though… It was about the bullying culture in medical training and the reverse sexism that exists towards men training in the woman’s world of obstetrics and gynaecology.

I hope people enjoy the book and find it useful. It’s mostly what I wanted to say, but I know a book like this has to be a little bit vanilla to cater for all tastes and not to step on people’s toes.

If this thing takes off and people are reading it, I may not be as careful about what I say online. So apologies in advance if I offend anybody in the future…

My key philosophy for looking after women in pregnancy and during birth is choice. I am not pro nature or pro medicalisation. I am not pro doctor or pro midwife. I believe in helping women and their partners to be informed about options and risks. It’s about knowing what is likely to happen, what possibly could (but probably won’t) happen and what can be done in all situations. I see the art of obstetrics as helping women to be empowered to choose the birth that is right for them and then letting it happen.

If any of you want to follow David’s journey in the publishing world why not grab a copy of his book. It can be purchased through all main bookstores around the country, as well as online through Pan Macmillan AU https://www.panmacmillan.com.au/9781760556464/

You can also check out the Feed Play Love podcast with Shevonne Hunt interviewing David and Ruby. Click the link below!

That’s all for today ladies. I’m off to crack a bottle of champagne and celebrate having my hubby back!

Your friend and parenting peer

Hi, I’m Cherie. As a mother to four young children, I totally get what it’s like to do ten things at once. Teaming up with my husband David; Obstetrician and author, we share our experiences on pregnancy, birth and parenting.

Latest on the Blog